Regent, SIERRA LEONE, 1 September 2017– “At around 5 o’clock in the morning I left my house to go to the bakery. When I returned I saw the disaster occurring. I saw the rocks from the hill fly up into the air. When the rescue team pulled my brother out from the mud, they pulled out his unclothed corpse and some of his body parts,” explained eight-months pregnant Martha Kamara.

Martha, a 28-year-old mother from Motormeh Community in Regent, is a survivor of the floods and landslide which recently devastated 13 areas in Freetown, the capital of Sierra Leone. Whilst Martha managed to survive the landslide along with her daughters ages 9 and 5, she is in mourning for the death of her three-year-old daughter and her brother. Martha, who is pregnant with her fourth child, is now homeless and heartbroken.

Before the disaster, Martha used to sell bread and small provisions for a living to support her family.

In describing her reaction at the epicentre of the landslide, Martha explained how she stood there in shock, feeling helpless and unable to do anything, seeing her brother’s limbs being removed from the mud and not knowing the whereabouts of her three-year-old daughter. At one point, she collapsed and fell unconscious.

“Martha was scooped up by stationed soldiers and taken to the Regent Community Health Centre, with her two remaining children,” said Aisha Conteh, the Regent centre’s community health officer. “Martha was placed on an IV drip and received a full examination since she is eight months pregnant and as she was in a stressful state. After we ensured Martha received quality maternal health care, she was then discharged from the community health centre five hours later.”

Martha left the UNFPA-supported Regent CHC and travelled back to the disaster site to look for her daughter who was still missing. Unable to get through the cordoned area, which was manned by military soldiers, and coming to the realization that she may never see her daughter again, Martha and her two children walked to Saio Elementary School, which became a displacement site for survivors.

“In my condition, I couldn’t make it to Connaught Mortuary to see if the body of my daughter was there or identify my brother,” explained Martha. “I needed to find somewhere to safe stay for the night with my children. We were hungry, tired and still in shock from what had just happened. Filled with distraught and showing her very swollen ankle sustained at the disaster site, Martha stated, “I lost everything. I had bought all the things for the baby before the disaster, it’s all gone, even the dress I’m wearing isn’t mine, I had to beg for it,” she added whilst looking down at the shoes she was wearing; the only item she had before the disaster hit.

When Martha arrived at the displacement site and discovered it was overcrowded, the family found lodging in the corridor of a friend’s one-room home. Every day, Martha and her two surviving daughters travel to the displacement site to receive cooked food, water and distributed donations.  In the evening they return to the friend’s home.

To ensure survivors had access to immediate health care services, the Regent CHC established a temporary health post, a day after the disaster occurred, on the grounds of the Saio Elementary School, managed by community health officers, Jenebah Sesay and Aisha Conteh.

“We lost two staff members in the disaster. We lost our laboratory technician and state enrolled community health nurse, along with their families on Monday,” said Jenebah. “When we set up the temporary health post, we bought emergency drugs from Regent Clinic and attended to the survivors who needed urgent medical attention. We know of eight pregnant women in the Regent community who survived the landslide. On the first day, two pregnant women visited the temporary health post and were given full examinations as they were suffering from skeletal and muscular pain,” added Jenebah.

“A lot of the people who are visiting the temporary health post are coming in with complaints of muscular and skeletal pain caused when trying to rescue others from the landslide,” explained Aisha. “Many people are contracting malaria because the flooding creates breeding grounds for mosquitoes which causes an increase in malaria and other water- borne diseases. However, for under-five’s, the most common illness is malaria, severe malnutrition cases, and acute respiratory tract infections. We have been referring cases of severe malnutrition to the Regent CHC for proper assessments and to provide food,” she added. 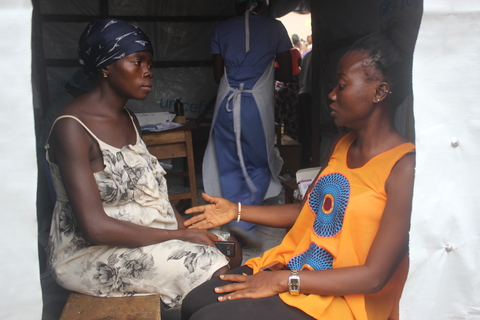 Over 500 deaths have been confirmed, and 810 people are missing, according to a 31 August report from the United Nations. Some 1,900 households were affected, the government has reported, including hundreds of pregnant and breastfeeding women, like Martha, who have health and hygiene needs that can easily be overlooked in a disaster setting.

UNFPA is helping to meet the needs of women and girls affected by the disaster. With its partners, including the Planned Parenthood Association of Sierra Leone, UNFPA has reached 83 pregnant women with antenatal care and ultrasound scans.

UNFPA has also distributed over 1,000 dignity kits, which contain essential personal items such as sanitary pads, underwear, cloth wraps, soap, toothbrushes, a torch, as well as family planning brochures. The kits ensure women and girls maintain a sense of dignity at a time when they need it most. And pregnant women, including Matha, have been reached with “mama and baby kits,” which contain baby clothes, toiletries, diapers, socks and cloth wraps.

“Trauma is a major issue for those affected,” said the World Health Organization in a September report on the disaster. There are protection needs, as well, because the risk of gender-based violence increases in humanitarian settings. To address these needs, UNFPA has trained 54 social workers, partners and family support officers, who will man six protection desks in affected communities. The family support units are attached to local police stations.